Image courtesy of arkorn at FreeDigitalPhotos.net

The Tampa Bay Buccaneers football team recently had several of its million dollar superstar players sidelined by a “superbug” infection that was thought to have been acquired from artificial turf abrasions. The artificial turf apparently had become a breeding ground for a germ that has become known by its acronym MRSA. MRSA is short for Methicillin-resistant Staphylococcus aureus but described in the media, as well as scientific circles, simply as “superbugs”.

“A USA Today investigation shows MRSA bacteria, once confined to hospitals, are emerging in communities to strike an increasing number of children, as well as schools, prisons, even NFL locker rooms.”

Superbugs are the germs that have adapted to the antibiotics that formerly stopped them in their tracks. Now they have become so resistant to antibiotics, an infection from them can be deadly.

The antibiotic resistant germs appear to have evolved in the hospital setting where there is a high concentration of sick people and a correspondingly high usage of antibiotics. They are causing a new condition that is described as Hospital Acquired Infections or HAI’s. An HAI is an infection that was acquired by a patient after they were admitted to a hospital. According to the Center for Disease Control there are 1.7 million cases of HAI each year and it kills more people than breast cancer, AIDs and auto accidents combined!

To battle superbugs doctors and hospitals have resorted to increasingly stronger antibiotics; some so deadly they risk killing the patient. They are also using cleaning agents and disinfectants that are highly toxic, smell disgusting and leave behind residues that are not environmentally friendly.

One solution that the National Football League is using to disinfect the artificial turf is an ultra violet light sled that is rolled over the surface. Ultraviolet light has been used for over 100 years and is a proven germ killer and as a side benefit – zero toxicity or odor. Quite simply it stops bacteria dead.

The Energy Alliance Group is currently introducing a brand new ultraviolet light system that is being tested for use in settings where risk of contamination from superbugs is high. It is called the Arcalux Health Risk Management System or simply HRMS and it looks like a standard ceiling fluorescent light fixture. The “secret sauce” of the HRMS is the hidden ultraviolet chamber that eliminates airborne “superbugs” 24/7. 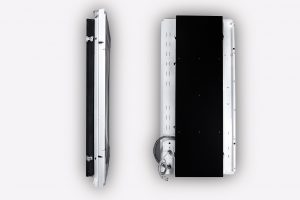 Using an array of extremely quiet fans the unit draws room air into the ultraviolet chamber where the high intensity light destroys the DNA of any infectious germs that may be present. Destroyed DNA means no reproduction and zero possibility of spreading infection. The clean air is then re-circulated into the room. This process takes place 4 times per hour, 24/7, providing constant protection to anyone occupying or visiting the space. It is a green technology that leaves no odor or toxic residue.

The HRMS has completed clinical testing for Bacillus, Serratia, MRSA and Staph and the results have been exceptional. The clinical tests were performed at the Aerobiology Laboratory Associates, Inc. in Dulles, Virginia. Aerobiology Laboratory Associates has accreditations through multiple agencies including the Centers for Disease Control. Moreover, these tests were completed in accordance with protocols established by the EPA for hazardous biological removal and, in each test, the HRMS proved its efficacy with an average of 99.85% pathogen-removal rate. Energy Alliance Group is now in the process of securing sites for testing it in real world settings.

We will keep you informed of our progress as it unfolds.

If you want to see how the Health Risk Management System works, here is a short video.