During the cold, dark months of January and February, the greenhouses of Mud Lake Farm were formerly dormant. Most of the staff was on temporary layoff awaiting a return to work when the longer daylight of spring made the farm bounce back to life. 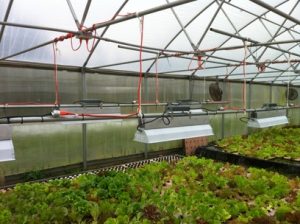 Thanks to an unexpected opportunity to test the TotalGrow light emitting diode (LED), the green houses now grow produce all year long and the staff is never without work. It’s an interesting story that is founded upon energy efficient lighting.

The Kent Garden Club recently heard the fascinating story of Mud Lake Farm in a presentation highlighting hydroponic gardening. The speaker was Kris Van Haitsma and I followed up with her to hear the rest of the story.

Kris is co-owner of Mud Lake Farm along with her husband Steve. The title of Kris’s presentation to the garden club was “Playing with Mud” and detailed the evolution of the farm from a muddy cow pasture to a highly productive hydroponic greenhouse operation.

The property on which the farm was built has been in Steve’s family for generations. It is primarily low lands and difficult to grow crops on. Kris wanted to do something different with the land which led her to purchase a used greenhouse. After many false starts Kris and Steve settled upon a hydroponic farming operation as the focal point of the farm.

At the point where Kris and Steve had four greenhouses operating during the usual short growing season they were asked to test TotalGrow LED lighting in one of their greenhouses. The goal was to extend the growing season and increase their productivity. 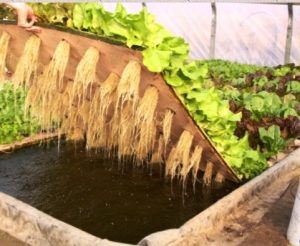 With hydroponics no soil is needed and the plants float on nutrient rich water 4 to 12 inches deep. During the winter many types of lettuce thrive in a hydroponic garden if they can be kept from freezing and if supplemental light is provided.

In the past the Van Haitsmas had considered high pressure sodium lighting but could not justify the inefficiency of what is considered a typical greenhouse light. The bulb is expensive, uses lots of electricity, needs to be replaced fairly frequently and does not produce the optimum spectrum of light for good plant growth. Not a good combination when your goal is profitability.

An attempt at supplemental lighting with fluorescent bulbs led to less than desirable plant growth so when the test offer was presented, the Van Haitsma’s agreed to install the LED based TotalGrow system in one of their greenhouses.

Kris and Steve were amazed when they realized that the one greenhouse, using TotalGrow lights, was producing more than the other three greenhouses combined. That made adding TotalGrow lights to a second green house an easy decision. Ultimately they have plans to light the remaining houses with total grow as demand for their products rises.

Using a geothermal heating system to keep the air temperature above freezing, the Van Haitsmas expanded the variety of plants they could grow at the same time they developed new outlets for selling their fresh produce. Mud Lake Farms is now a vibrant year round operation! 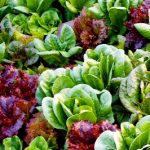 “We grow around 40 different varieties of lettuce, including red and green romaine, butterhead, batavia, and leaf lettuces. Since we grow lettuce year-round, we can provide produce to our customers even in winter.”

Kris’s customers include 80 – 100 families living in West Michigan that are enrolled in a type of buyers club. During the Farmer’s Market season they have a booth offering fresh picked products including custom made cordials (flavored syrups) that are made from ingredients grown on the farm. 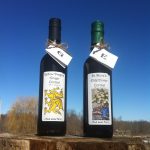 Many local chef owned restaurants prefer the premium quality of Mud Lake Farm’s freshly picked produce. Relationships with those chefs are most often made by word of mouth and one came from a web search of LocalHarvest.org. Sadly, most chain restaurants do not seek out local growers, a situation that the restaurant chain Chipotle is making great strides at correcting.

Kris noted that a lot more infrastructure is in place for connecting locally grown products with local outlets. The sustainability and farm to table movements are helping drive those connections.

When a product like the energy efficient LED TotalGrow can improve the cost efficiency and productivity of a local grow operation, everyone wins as more products are brought to market and enjoyed by customers in many venues. The Van Haitsma’s Mud Lake Farm is a “shining” example of using energy efficiency to drive productivity as well as profitability!