Two key questions came up during a meeting with EAG’s newest client last week. The same questions are often asked by financial executives in businesses requiring significant amounts of energy in their production process.

The questions were asked of EAGs Vice President, Curt Monhart, as he toured an industrial site that uses massive amounts of energy in the drying of wood prior to manufacturing a final product. The owner of the company began the tour by asking:

What technologies are available to dramatically reduce my operating and energy costs?

How can I finance those technologies without taking a hit to my cash flow?

The process of drying wood requires a massive amount of heat and electricity. The company’s energy costs are significant with an annual electrical bill somewhere between $600,000 and $700,000. The owner of the business is focused on creating a plan that will help him control his use of energy in order to improve profits and allow his product to remain competitive in the marketplace.

A potential answer to the second question is what originally initiated the meeting with Monhart. At the recent OnSite energy event the business owner had heard EAG’s CEO, Scott Ringlein, discuss Property Assessed Clean Energy (PACE). PACE is designed to fund energy efficiency projects by using the resultant energy savings to repay the financing. This protects cash flow and prevents the delays that are all too common when energy projects have longer payback periods.

“The increased focus on sustainability has made industrial CHP more attractive. It substantially reduces carbon footprint compared to generating steam or burning fuel on-site and importing electric power from the grid.” Wikipedia

Combined Heat and Power, which is also known as cogeneration, is a system that produces electricity and then captures the heat by-product for utilization in a variety of other applications. It’s similar to the heating of a car’s interior through the use of the waste heat given off by the engine. As the name suggests, it is the combination of two processes into one that yields a dramatic energy saving through the elimination of redundancy and waste!

What caught the attention of the business owner during Ringlein’s presentation was when the CEO detailed a Combined Heat and Power project of a Michigan college that would result in a 36% reduction in energy use. What was especially attractive to the business owner was when he realized that all the costs of the college energy efficiency project would be paid for out of the energy that was saved! With zero up-front cost to the college, the whole project would yield a 56% lifetime return on investment. That was exactly what was needed for his business! 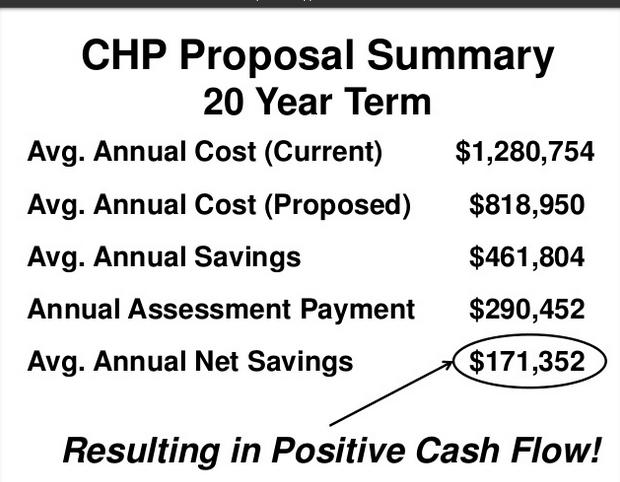 What made the Combined Heat and Power technology a key interest to the business owner was the energy efficiency it represented. CHP replaces a company’s incoming electricity and gas with an on-site electrical generator that captures the heat from the generation of electricity and uses it as a source of heat. This process diminishes, or eliminates, the need for additional heat. Energy that was formerly wasted in the generation and transmission of electricity is now added back into the manufacturing process creating a significant reduction in overall energy used!

“By combining the generation of heat and electricity from a single fuel source, such as low-cost natural gas, and displacing a site’s current use of grid electricity, cogeneration systems burn less fuel per unit of useful energy output” Darren Jamison, CEO, Capstone Turbine Corporation

Ringlein noted that CHP is a technology that can benefit businesses having a high demand for electricity along with the ability to utilize the heat byproduct in their production process or the heating of their structures. He also noted an additional benefit that is high priority for many business operations. CHP assures the continuation of production by eliminating the risk of grid failure or “blackouts”. Businesses, including those that function in remote locations or locations faced with rolling brownouts, are increasingly looking at CHP as a production stabilizing factor that guarantees the ability to maintain production schedules.

Producing on-site electrical energy, and using the hot exhaust as a combined energy solution, conserves energy and reduces utility costs. It is also a key green business concept for the future that will increasingly require distributed energy production.

At the end of the tour of the operation, Curt Monhart shared with the business owner his frustration with the many companies that continue to use outdated energy technologies in their production processes. In many cases the owner considers energy to be a fixed expense with little opportunity to significantly reduce it. Or they don’t understand how to make the adoption of energy saving technologies affordable requiring zero capital outlay with long term, fixed interest rate, loans. It’s a situation that Monhart attempts to fix every day.

You can follow future details of this interesting project HERE!