“Without a better option, 9 out of 10 commercial clients will choose saving $15,000 in upfront cost and give up $1.1 million in long term energy savings!” Scott Ringlein

Just last week the CFO of a large company was presented with an energy efficiency proposal comparing the cost and savings of LED versus fluorescent lighting. On the surface the fluorescent option was $15,000 cheaper than the cost of LED. When the long term savings (20 years) were compared, the LED option reduced overall costs by a dramatic $1.03 million! A significant figure that should have made LED the easy choice! So why did the CFO look at the proposal and choose the fluorescent?

Payback is the length of time it will take to get back the original money paid on any project or purchase. It represents how long a company’s cash will be tied up and unusable in other areas.

In the proposal discussed above the payback period was going to be 3.9 years (see graphic below). In other words, it would take 3.9 years for the energy advantage of the LEDs to pay back the original investment. In the CFO’s mind his business could not afford to have money tied up that long. The money could be put to better use increasing production or selling more products. Even though LEDs would save the company $1.03 million over 20 years, it was more important to pay as little money up front in order to protect their cash TODAY!

The New Model – No Upfront Costs

In 2008 some forward thinking people in California decided to find a better way to overcome the greatest barrier to energy efficiency upgrades: the upfront cost. Calling the program Property Assessed Clean Energy or PACE it created the ability to use energy cost savings as a source of cash!

Instead of having companies dip into their credit or cash reserves they figured out how to use the money that is already being spent every day on wasted energy to pay for energy efficiency improvements yielding long-term benefits.

There is a massive need for energy efficiency in the collection of commercial property that was built at a time when energy was cheap. It has been estimated that the average age of commercial property in the U.S. is 50 years and the sum total of money being wasted on energy in those properties represents a great energy saving opportunity. If the wasted money can be used to fund energy efficiency projects a CFO won’t have to be concerned about payback! With no upfront capital required, a CFO will be able to reduce operational costs while at the same time pay for the energy efficiency upgrades out of the existing cash flow!

Property Assessed Clean Energy was set up so a CFO would not have to tie up money for any length of time. The program provides long term financing for energy efficiency upgrades and requires the project to produce a positive cash flow from day one. 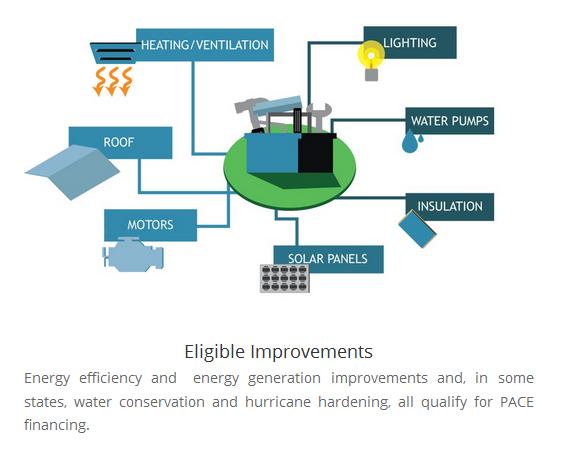 Learn How to Use PACE to Reduce Wasted Energy

Energy efficiency projects often stall because of concerns about costs, a lack of capital or the time it takes to see a return-on-investment. If you’re interested in energy efficiency and would like to learn how to overcome those barriers The Energy Alliance Group of Michigan is hosting a series of free webcasts. The webcast will explain how to use the cost of wasted energy to pay for energy efficiency utilizing the “world changing” program known as PACE. To register for this informative event simply click HERE.