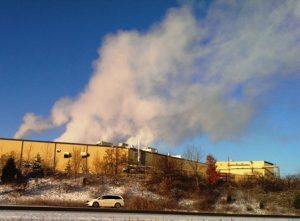 Industrial chimney stacks typically disgorge a large volume of waste heat that can now be captured, recycled and put to use in a wide variety of creative ways.

The heat that rises out of industrial buildings has already been paid for during the initial application (heat for the building, water or processes) and is now simply waste as it’s exhausted into the atmosphere! It’s time to stop the waste and start recycling!!

Recycling chimney stack heat makes it essentially “free”, the only cost being the purchase and installation of a system to capture it. While financing such a system was formerly difficult to obtain through typical business loans, the new Property Assessed Clean Energy (PACE) financing now makes it possible.

Since 2009, PACE has been adopted by 31 states. When a state enacts the PACE statute, it allows counties and cities within the state to adopt PACE. Once adopted, businesses in those districts can now utilize a special property tax assessment to fund energy efficiency projects. Commercial, industrial, or multifamily facilities using a chimney stack can now consider PACE as an option if the project meets certain criteria.

PACE offers long-term, fixed-rate financing solutions not only for capturing waste energy but also for many energy efficiency, water efficiency and renewable energy upgrades. The savings generated from these types of projects must exceed the PACE loan repayments and generate positive cash flow for property owners. Companies can now consider alternative energy projects that would have never been considered in the past due to financial barriers.

Most people think becoming energy efficient simply means reducing energy use. It’s common to think replacing an old technology with a new one that consumes less energy is the only way to become truly energy efficient. However, innovators in the energy efficiency arena are taking multiple paths. They look at the energy already being used and look for ways to reuse it in addition to using it more efficiently. In actuality they are “repurposing” energy. The innovators look for energy that is being wasted and find ways to harvest it then put it to use in ways that were never considered.

As an added bonus, what is released up most chimney stacks contains a large volume of moisture. The moisture can easily be collected at the same time waste heat is recovered. It can be a source of water for irrigation of building grounds without having to risk non compliance with the growing number of irrigation restrictions!

Who is a likely candidate for taking advantage of this often invisible source of energy? Hospitals, hotels, universities, commercial buildings, district heating plants, prisons, commercial laundries, food and beverage processors and even nuclear power plants. This energy can be used to heat onsite water, industrial process water, or even to heat the building again!.

Becoming energy efficient does not necessarily mean just using less energy. It can also mean harvesting energy that was formerly wasted. A true unexpected benefit is when the harvested energy that is already paid for can be used in new and creative ways.

When you see billowing clouds of steam rising out of a chimney stack think of it as an untapped source of virtually free energy! The cost for the technology needed to capture what was formerly just a waste is now available thanks to PACE financing. That cost can be less than the energy saved yielding improved profit for companies as well as building owners!