You’re seated at your favorite restaurant and the server is placing a salad in front of you that is a delight to the senses. The various hues of the microgreens and the white of the daikon root contrast with the burgundy-red of the bull’s blood beet foliage and provide an array of colors that appeal to the eye. Inhaling deeply you smell rich basil as it blends with the succulent aroma of cilantro and parsley. As you take your first bite you experience a burst of flavor that makes you pause and savor the moment. The restaurant you’re sitting in has become your favorite because you know one of the secrets to their success! All of the microgreens, herbs, garnishes and some of the spices are grown onsite and picked within moments of the chef’s preparations! They have redefined fresh!

Is this a vision of the future? Not at all! The new definition of fresh is already a reality and it appears to be the start of a sustainability trend that will soon become the norm.

I had a chance to interview Christy Kaledas who makes the “fresh” dining experience described above a daily reality. Even in the middle of a northern winter, when it’s zero degrees outside and sunlight is at a minimum, Christy delivers fresh produce to the restaurants and grocery stores in the Ann Arbor, Michigan area. What started out as a small indoor operation in her basement has now expanded to the basement of a forward thinking area restaurant called The Black Pearl! 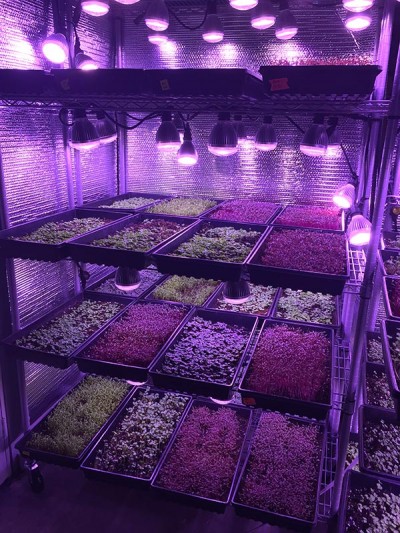 My connection to Christy resulted from her use of the TotalGrow grow lights in her grow house operation. They provide the artificial light her plants need to be grown indoors. While LED-based, the TotalGrow technology is uniquely different than any other grow light. Its “secret sauce” is a patented engineered lens mounted over an LED lamp. When light from the LED passes through the lens, it is transformed into the ideal spectrum for plant growth and development. TotalGrow has been highly effective at increasing the weight and quality of greenhouse-grown lettuce. In addition, the Energy Alliance Group (EAG) is involved in a project that will convert surplus shipping containers into mobile grow houses (link to blog article).

Another reason Christy chose TotalGrow is its reduced energy consumption compared to the fluorescent bulbs she used previously – about 50% less. Less electricity means lower costs and resulted in increased profitability. Another key benefit was a shorter growing cycle. Because of TotalGrow’s ideal spectrum for plant growth and development, it accelerates the time to maturity. Christy had real world proof of the cost effectiveness of the bulb that EAG offers to greenhouse operations and she also has a great story that highlights the new trend in “fresh”!

Planting the Seeds for a New Career

Christy grew up on a farm but chose the career of a financial advisor at a bank. One of her customers asked if she liked her job and her reply was “I like having a job”. When the customer followed up by asking her what her ideal job would be, she replied “my dream job would be growing fresh organic vegetables and doing something good for the community.” The customer’s response to her statement ultimately resulted in Christy’s change of career. The customer said “I own a restaurant and you could grow for me!” The rest as they say is history.

As Christy set out to pursue her “dream job” she quickly realized that the cost of buying land or purchasing a greenhouse was prohibitive. With four kids Christy didn’t want to become an absent parent by commuting to a distant location. After doing in-depth research she realized she could set up a cost-effective grow house operation in the basement of her home.

Starting small, she began by growing 20 trays of produce at a time. As word spread, and her customers increased, she ramped up capacity to 160 trays growing under the TotalGrow lights. Within a year of the “dream job” conversation Christy gave notice and quit her job. She is now the supplier for several area restaurants, a couple of grocery stores and the local farm store in downtown Ann Arbor. A recent customer, an upscale grocery store, overwhelmed the capacity of her basement operation. It was time to move into phase two!

Here’s where the story becomes very interesting. Selling to restaurants gave Christy access to the unique knowledge of chefs, particularly The Black Pearl’s Russell Culp. Chef Culp provided Christy with unique market research that was quickly incorporated into her produce offerings. She learned what produce chefs valued most and which ones were the most difficult to purchase in the winter season. She began offering a bewildering array of micro-greens, edible flowers, mini veggies and specialty produce that was highly coveted by chefs and savored by the customers they served.

More market research came through her grocery store contacts. One store owner predicted that many upscale grocery stores would soon be adding attached green house operations. He described how sustainability initiatives and the desire to purchase products locally have created very discerning customers. The new breed of customer wants to know where their produce is grown, under what conditions and if it’s truly fresh. Imagine being able to walk through the greenhouse of your local grocer, talk with the grower, and then pick out the product you want and watch it “harvested” on the spot! It gives a whole new meaning to fresh!

Speaking of fresh what Christy’s customer’s value most is the knowledge that the produce she delivers was harvested that same day! The same can’t be said for lettuce that is shipped in from distant locations!

Having outgrown her basement operation Christy is moving into an expanded location. The Black Pearl restaurant in Ann Arbor is putting the finishing touches on an onsite grow room located adjacent to their kitchen. Christy realized that the space was big enough for her to double her present production, provide most of the produce the restaurant would need, and still have enough for a growing list of outside customers. The chef of the Black Pearl will now be able to walk a few steps to the onsite grow house and pick the produce that will grace the meals served later that day. Imagine the energy saved when produce is created onsite instead of trucked in from a different state or country! Christy is redefining the “farm” in the farm to table movement!

Christy believes the Farm to Table movement is only in its infancy. She sees a growing interest in people making healthy food choices and predicts that within the next 10 years there will be a significant increase in the availability of locally grown produce. Her parting comment was food for thought “eating strawberries shipped in from Venezuela will never be as good as eating strawberries that are fresh picked locally.”