While an engineer can quote numbers and acronyms to validate energy efficiency upgrades, the lens of a camera provides a unique tool for measuring results. Images better represent what appeals to the people living and working within the space. Pictures provide a unique way of measuring the benefits of energy efficiency upgrades that can never be captured with a meter in the hand of an engineer.

Ken Peters is the man behind the camera on EAG energy efficiency projects. He is responsible for capturing the visible conditions of a project pre-launch and then a follow up record once everything is finalized. I interviewed Ken hoping to learn more about the details of a project following his final videotaping of an EAG energy retrofit of a Detroit area auto dealership.

Ken responded by describing the various technologies that were installed during the renovation – LED lighting, weather stripping, high speed doors, a compressed air system, and a modern HVAC system. It was the same story you would get from the contractor. I wanted to figure out a better way of telling the story!

“While an engineer can quote numbers and acronyms, the lens of a camera provides a unique tool for measuring energy efficiency”

I then asked Ken if he had any pictures that would illustrate the story. That’s when Ken’s description of the project changed dramatically. Here are Ken’s comments along with some of the pictures he took that illustrate the transformation from the viewpoint of the end user:

During the winter months the service area was cold and anyone working within the space needed to wear a winter coat. Cold air would blow in through the gaps around the large service bay door when they opened and closed for the vehicles in need of repair. Each time the doors opened a blast of cold air, often mixed with rain or snow, would drop the room temperature while volumes of warm air also escaped. The old open flame heaters could not reheat the space fast enough.

New high efficiency heaters were installed along with tightly sealed service bay doors that open and close in seconds! The service staff now work in their uniforms instead of winter jackets!

The cars under the outdoor parking lot lights were difficult to see and the color was hard to determine under the artificial light. The new LED lighting is much brighter and makes the color of the cars more dramatic and closer to what they would look like in daylight. Even though the new lights are brighter they use much less energy and won’t need to be replaced for years! 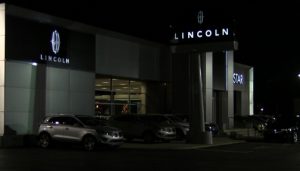 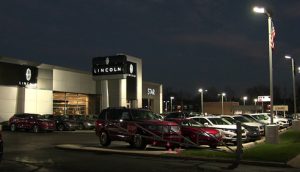 The service area was gloomy under the old lighting. With the addition of extra fixtures and the upgrade to new LED technology, the space is now vibrant! 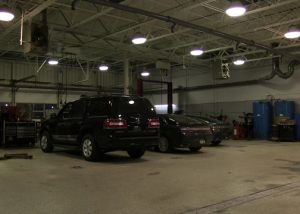 While a meter can provide facts that clearly illustrate the benefits of energy efficiency renovations, pictures capture the details that make energy efficiency appealing to the eye. They reflect the comfort the occupants appreciate which is often difficult to measure with a gauge. Ken’s pictures are a perfect end to an interesting project that will be highlighted in a soon to be released video.