“If I were to recommend one upgrade, lighting retrofits leveraging the emergence of LED use are the simplest for most building owners to execute and provide an easily calculable ROI that will only improve as pricing falls.”
Gary Brennen – Syska Hennessy Group

I read Gary Brennen’s quote last week at the same time I received an e-mail from Sean Sullivan, director of business development for the TOGGLED Company. TOGGLED is an LED lighting manufacturing company based in Troy, Michigan. Sean’s e-mail shared the results of a lighting retrofit that illustrated the TOGGLED LED technology in an installation that was adjacent to a room that was presently being lit with metal halide bulbs. Included with the e-mail was the dramatic picture I included below. Here was Sean’s explanation of the picture:

“Attached is a comparison shot of two warehouse bays. The one side has 6 tube high bay fixtures with 5000k TOGGLED high output tubes. The other side is lit with metal halides.” 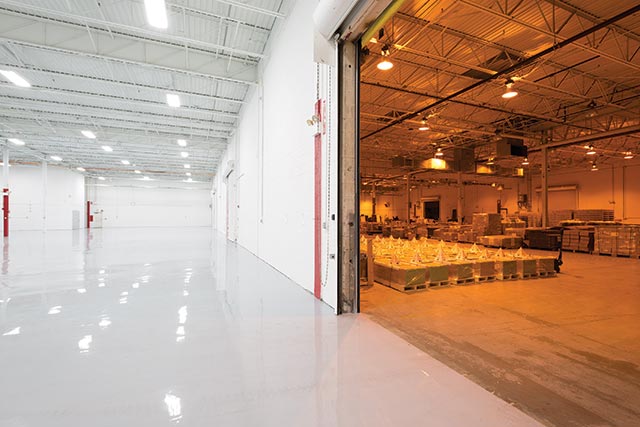 The TOGGLED Company is one of EAG’s alliance partners. They are focused on “next-generation solid-state lighting solutions” specifically LED tubes. TOGGLED’s patented products are designed to directly replace fluorescent tubes with LED tubes. One benefit of the bulb is that it is a simple retrofit that does not require a new fixture. A huge cost savings!

Sean’s email quantified the advantage of LED over the metal halide bulb with some interesting numbers that measured the difference in brightness between the two rooms.

Sean further noted: “there are some areas of the yellow bay that are actually putting out more foot candles than the LED tubes. However, our eyes perceive whiter light as brighter, so using 5000k LEDs makes the white bay seem brighter even though there are some places where it isn’t. Plus the LEDs have a much more even light output and distribution.”

LED lighting technology is fast becoming the preferred retrofit choice for lighting. The fact, as Gary Brennan noted above, that the ROI is easy to calculate makes it a proven winner for cost conscious building owners. As Sean’s picture illustrates the visual results are rather dramatic!