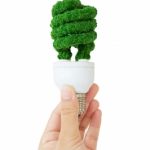 The Compact Fluorescent Lamp (CFL) was positioned to become the energy efficient replacement for the incandescent light bulb that loses 90% of energy to heat. As the usage of CFL’s grew, the bulb’s list of negatives grew also.

One of the biggest negatives associated with CFLs is the mercury they contain. Even though fluorescent bulbs use less energy than an incandescent, they are not a true “green” solution. Cumulatively they are becoming one of the largest sources of mercury contamination in landfills!

A recent article entitled LEDs turn out the light on incandescents and CFLs detailed the increasing appeal of the light-emitting diode, or LED, due to its energy efficiency as well as the absence of mercury. Here is a quote from that article:

“Compared to CFLs, LEDs do not contain hazardous, mercury-tinged gas, and they can withstand being turned on and off repeatedly without reducing their life span. LEDs also come on instantly, unlike CFLs that typically have to warm up (which is why some people just leave them on all the time). Most LEDs are also dimmable (an expensive feature for special CFLs), and they do not suddenly burn out without warning (LEDs gradually lose their brightness before failing).

In the past the cost of LEDs was the biggest negative to their usage. As the technology matures that cost keeps dropping and they are quickly becoming the most green and energy efficient lighting choice for many applications.

One company the Energy Alliance Group has partnered with, TOGGLED, is leading the way in creating an LED replacement for the standard fluorescent ceiling bulb found in most business settings. Its ability to produce accurate light is highly valued in applications that depend upon true color representation.

There are many advantages to choosing LED technology. A short list would be: significant savings on lighting expense; minimal maintenance due to less frequent bulb replacements; improved work environment and productivity (no buzz or light flicker); and in some cases they can qualify for energy rebates from the local utility company. All big wins for companies that depend on light in their operation.

See how LEDs are being used in agriculture: